My unique experience with ‘Help 4 refugee children’ has started at 4am in the morning while making my way from West London to South London. I had mixed feelings of tiredness, curiosity, excitement and uneasiness. I felt that why because I was not sure what waits for me today. However, smiling, friendly, sleepy and welcoming faces of other volunteers met me with such a warmth that many of my anxieties disappeared very quickly. Especially when it was accompanied with wonderful view of the sunrise, sleeping London and interesting stories told in the car on our way to Dover.

I think real challenge and unforgettable experience has started once we touched the soil of France. We were passing the old warehouses and very industrial area when we sow some men running around or hiding behind the bushes as police was approaching from the front. It just felt like different world. We all knew why those men were running toward the port and why police were chasing them, but nobody said a word in the car. It just was one of those situations then you feel useless and hopeless and nothing can be said.

The first stop was at the one of the charity warehouse where we left donations brought from London. The charity warehouse was dilapidated, but the energy, warmth and positive atmosphere in the place was magic. Volunteers working at warehouse were such a nice people. They told us what donations are needed for coming months and how we can help them. While we were dropping the donations, another group of us (in second car) went to see the refugee family they were building a freidnship for months. Once both visits were over and little goody begs for children were packed with input from Homeopath organization, we made our way to the ‘camp’.

First of all, that place cannot be called camp. People live in the woods. There were no toilets, or they were somewhere really far away. There was a water tank with some tabs, for considerable amount of people. Mostly young men just were dispersed around some fields and woods. It was just such a hard view to see. We parked the cars and went for the small field just by the main path. Some kids started running to the volunteers as they already knew who we were and why we are here. Some kids hugged volunteers who they recognised form the last time. The smiles and excitement on children’s faces were priceless. I felt I bit shaken by all environment and situation, but I told to myself that I am here to have a good time with kids and to make their afternoon as fun as possible, therefore, I just took a deep berth and went ahead with a big smile.

It was wonderful few hours. We draw masks, blew the balloons, painted canvasses and t-shirts. Then we moved to face painting and sports games. Kids were so excited; they joined all activities with such a willingness. They just were kids again, kids without that constant worry of what will be next with their lives. They just were kids who were allowed to be kids at least for few hours. I know, that it is very little we can do for them and that few hours of playing will not make any real difference in their life. However, being able to bring back a childhood, at least for few hours, for those who got it stolen by war and conflicts in the world, it felt simply good and right. No child should become an adult against his/her own will and too early; and those kids didn’t have any choice or say, it just happened to them.

Another wonderful thing which was happening in the parallel with kids’ games was ‘mothers corner’. We had Hana and nail polishers. Therefore, some of the volunteers actually spent time with the ladies painting Hana and doing their nails. It was so lovely to see how from very tired and worried faces of mothers, those faces, for few minutes, changed into happy and relaxed faces of women. This small change and a small retreat from the constant profound role of the refugee mother, who not only fights for her life but her children, was so needed for those ladies.

I had an incredible honour to have a change to speak with one of the mothers. She told me her and her family story. She was a teacher with people with autistic spectrum disorder back in Iraq. She and her husband had a nice and big house with garden. Her husband was a journalist. One day he wrote an article which was quite controversial and governing authorities started to persecute him until he had to flee the country. She and her children were at danger and they followed her husband not long after. Unfortunately, she never met her husband again. She doesn’t know where he is or what has happened to him. So two months ago she ended up in this refugee camp in France. She does not know what to do next. She just knows that she wants her kids to be safe and be able to live normal life. It was a heart breaking story and I really felt for this woman. We said warm goodbye to each other and she said with smile on her face that she hopes she will not meet me again as she hopes she will not be here

We got back in the cars and made our way to Calais to have dinner before the ferry. All 25mins everyone in the car was silent and deep in their thoughts… It was silence which meant thousands of words and feelings; and it was so warm and comforting. It was an experience which made me, as a person, to go back to my own basic core values and rethink the meaning of mine own life. It made me to rethink what is important for me in my life and what is just small trifles which will be forgotten in a few days. Also, it made me one more time to think how much I have in my life and how lucky I am to have it; and how easy to lose it all… 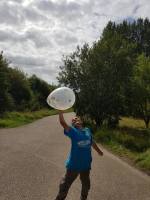